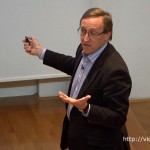 Communicating CERN – what we do and why it matters

Written by Tome Eftimov on June 10, 2015. Posted in Presentations

Recently, Dr James Gillies from CERN visited JSI and gave us an interesting lecture with the title “Communicating CERN – what we do and why it matters”.

Written by Tome Eftimov on February 17, 2015. Posted in Presentations

The open day at the “Jozef Stefan” Institute is part of “Stefan’s days” that are organized every year in late March to celebrate the anniversary of Jožef Stefan’s birth. ISO-FOOD takes  opportunity to open its doors to visitors – y ou are invited to visit our ISO-FOOD stand and our labs during guided tours at the Reactor centre in Podgorica and at the Institute’s main facility in Ljubljana . For details please follow the instructions at the Institiutes’ web page (link na: www.ijs.si).

Visitors are invited to gather every full hour (at 9h, 10h, 11h, 12h and 13h) in front of the main entrance (Jamova 39) to join a one hour guided tour. The programmes are: substance, robotics, bio-chemo-physics, information technology and the environment.
Visitors can also attend a one hour “School of experimental chemistry” workshop, where visitors will have the chance to participate in experiments.

Every full hour from 10 am to 1 pm there will be organized transport (departure from Jamova 39) to the Reactor Centre – JSI unit in Podgorica, where visitors will be able to see one of the Slovenian accelerators, the laboratories of the Department of Environmental Sciences, an exhibition on nuclear technology and the Triga nuclear research reactor.

Prof Horvat was awarded by the highest state’s Zois Award for her outstanding achievements in scientific, research and development activities in the field of mercury.

On November 10-13, Dr David Heath attended the “International Symposium on Food Safety and Quality: Applications of Nuclear and Related Techniques” organised jointly by the IAEA – International Atomic Energy Agency and the FAO – Food and Agriculture Organisation of the United Nations in Vienna, Austria. The ISO-FOOD activities and the research focus areas were presented at this unique forum of top international experts in development and application of nuclear related analytical techniques and researchers from the development countries, which was a unique opportunity for development of new collaborations.

Written by bkseljak on November 7, 2014. Posted in News

Our first e-newsletter is out. Welcome to take a look! If you subscribe for the newsletter, we will deliver it to your mailbox.

Next on the Programme: Stakeholder Workshop

ISO-FOOD will organize the first stakeholder event in 2015 – a Stakeholder Workshop in May 2015 – which will be held at the Jožef Stefan Institute. Representatives of business, academia, governmental organisations and NGOs are invited to present their views on the food quality and traceability issues, and become engaged into a stimulating discussion on the emerging topics of the food research, generating ideas and initiating collaborations. The key conclusions of the workshop will be published through a post-workshop press release. Contact us on erachair@isofood.eu

Written by Vanja Usenik on September 26, 2014. Posted in News

On 16 October 1945, 42 countries acted in Quebec, Canada, to create the Food and Agriculture Organization of the United Nations (FAO). In doing so they took another important step forward in man’s perpetual struggle against hunger and malnutrition. For through the establishment of FAO they provided themselves, and the many other nations that were to enter the Organization, with a mechanism through which its Member Countries could deal with a set of problems that are of major concern to all countries and all people.

So that, FAO was founded in 1943 at Hot Springs (USA) during the UN Conference on Food and Agriculture, and it was formally instituted during the First Session of the FAO Conference, held in Quebec, Canada, in 1945 – more information on FAO’s origin is available here.

FAO celebrates World Food Day each year on 16 October, the day on which the Organization was founded in 1945.

The objectives of World Food Day are to:

We use cookies to ensure that we give you the best experience on our website. If you continue to use this site we will assume that you are happy with it.Agree